Skip to content
-Posted on 18 August 2009-by Neil Sanderson

After two years of trying and failing to make a buck on its hyperlocal website LoudounExtra.com, the Washington Post will close the site next month.

Rafat Ali has the story at PaidContent.org, while former LoudounExtra blogger Tammi Marcoullier posts a few thoughts on the site’s demise.

As Rafat points out, the closure stands in interesting contrast to yesterday’s news that MSNBC is purchasing hyperlocal data service EveryBlock.

Residents of Loudoun County, a suburb of Washington DC, have also just lost their only local radio station.

J-Source has posted a memo from the Globe & Mail’s recently promoted Editor-in-Chief John Stackhouse outlining a reshuffle of senior managers.

There will be no deputy editor. Three masthead editors will take expanded responsibility for News and Sports (David Walmsley), Features (Jill Borra) and Business (Elena Cherney). Commentary and Custom Content remain under their current editors.

Executive Editor Neil Campbell remains in charge of Resources. Adrian Norris is Managing Editor – Presentation with responsibility for photos, graphics and design across all platforms.

As previously announced, Anjali Kapoor joins the Globe next week from Yahoo as Managing Editor – Digital, with Kenny Yum (from nationalpost.com) as editor of globeandmail.com.

In keeping with the digital expansion, Stackhouse announced that:

Two more positions will be added shortly to the core digital group – one to manage new projects across the site and our growing video capacity; the other to edit our content for a growing mobile platform. 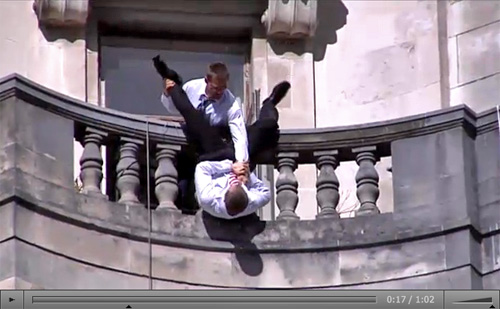 The Wall St Journal moved into new premises in June, and Chris O’Brien at Next Newsroom published the above photos.

Find more info and photos on The Next Newsroom Project 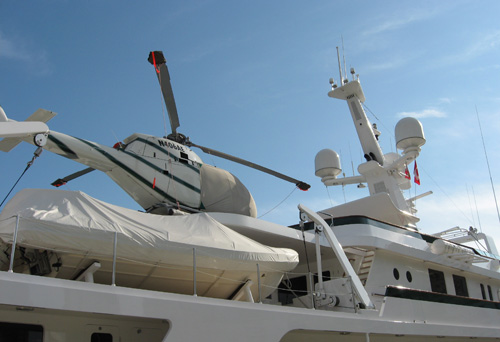 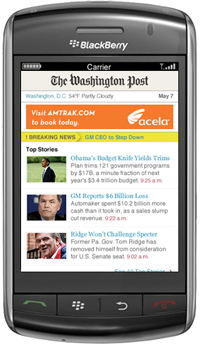 The Washington Post has launched a new selection of mobile services, including an iPhone-optimized site, a BlackBerry application, and other variations to work on cellphones.

MediaPost reports that the services were built in-house, and that two editors have been assigned to mobile content. E-commerce functionality, such as restaurant reservations and movie ticket purchasing, are reportedly under development.

It seems fewer newspaper sports writers have been turning up in the press boxes as a result of newspaper cutbacks, so Nascar decided it needed a “Citizen Journalist Media Corps” to keep the fans satisfied.

“The last 12 to 18 months, we’ve seen a drop in print media,” says Ramsey Poston, Nascar’s managing director-corporate communications, who oversees the Citizen Journalist project. “We’ve not only lost some of the biggest auto-racing writers in the business due to layoffs and cutbacks — people like Jim Pedley of The Kansas City Star, John Sturbin (of the Fort Worth Star-Telegram) and Grant James (of the St. Petersburg Times) — but we’ve lost the papers themselves. We used to get great coverage from the Rocky Mountain (Colo.) News, and now it doesn’t even exist. And other papers are simply cutting back coverage.

See also: Fire the sports writers? Not if the teams have anything to say about it

The Cato Institute’s Cato Unbound website this month features essays on the future of journalism.

Clay Shirky kicked things off on Monday reiterating a theme on which he blogged a few months ago – that this is a time of upheaval for traditional news media, with no single clear path to future sustainability.

Today, another journalism professor, Philip Meyer of the University of North Carolina at Chapel Hill, responds with five trends he sees emerging from the current chaos. It’s worth reading his full article but, to summarize, the five trends are:

The series is scheduled to continue with contributions from Paul Starr on July 17 and Steve Yelvington on July 20.

Joe Marchese at MediaPost explains why it’s so hard to get brand advertising onto websites at prices that will appeal to publishers.

…the issue with bringing branding online isn’t with the marketers and agencies, it is with the publisher side, maybe with some help from the marketers, of course ;-). Publishers can create “impressions” simply by adding ad units, but adding ad units don’t magically increase the amount of consumer attention in the world, or even on a given page. What publishers have that is of value to brand advertisers is consumer attention. In order to prove valuable to brand advertisers, publisher must find a way to share their audience’s limited attention with marketers in a FAIR exchange of value.

The question, of course, is how can online publishers increase advertising rates to make up for a reduction in impressions.

The marketer’s role in this is twofold: 1. Don’t force publishers’ hands by arguing both sides. Marketers can’t claim they value the opportunity to guarantee the delivery of a message to consumers, then when presented with such an opportunity, cite the lowest ad network CPM rate they have been quoted for negotiation purposes. 2. Build creative that is meant to be a contained brand experience/engagement. Engagements are not traffic generators. People don’t necessarily want to visit a brand’s website at the drop of a hat…

Marchese argues that publishers and ad networks need to do a better job of defining and delivering value for brand advertisers.

All of the Gawker Media sites have a new commenting system.

As explained on gawker.com, “we the editors are taking control back”.

As a site gets bigger, the comments tend to get busier — and sometimes more annoying. Our titles are no exception. Deadspin’s had to contend with a war between the daytime and nighttime users; Jezebel editors battle for control with a politically-correct mob; perceptions of Gawker are set by a small group of glib and bitchy commenters. All sites that are growing as rapidly as ours have something like this problem — and one that can’t be solved simply by banning the offenders or applying more strictly our approval process.

Editors will grant star status to their most-trusted commenters, whose comments will get greater prominence and who will, in turn, be able to grant prominence to others’ comments they like. (Stars were previously awarded based on how many followers a commenter had.)

Although moderators will continue to monitor the discussion, the stars will have their comments posted without pre-moderation, and will also be able to approve comments submitted by other users.