Latest data from Neilsen show that Stuff.co.nz/news has extended its lead in the General News category with growth of 29 per cent in the number of NZ-based average daily unique browsers when compared to the same category ranking a year ago.

The Wellington-based site, owned by Fairfax, now enjoys a lead of 48 per cent over long-time rival nzherald.co.nz, owned by APN.

Just six months ago, the margin between the top two sites was 25 per cent.

Third-placed yahoo.co.nz/news is down slightly in the same period, while fourth-placed tvnz.co.nz/news and fifth-placed BBC (no URL cited) have both gained slightly.

All figures are based on NZ domestic traffic to the news sections of the various websites. They do not indicate total visitors or page views. 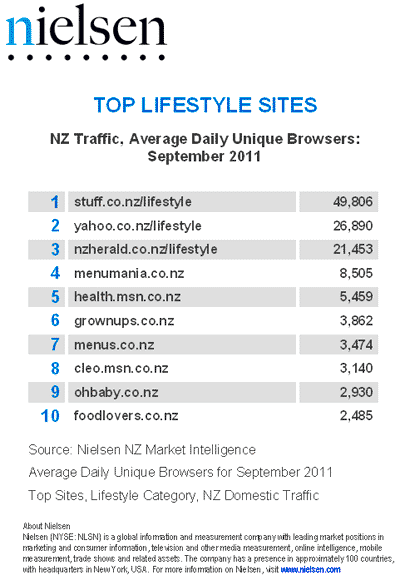 And it’s interesting to see (slide 16) how the sale of Google Android phones has increased much more rapidly than the sale of iPhones.

Johann Hari of the Independent in Britain has been caught plagiarizing.

Except he says it’s not plagiarism because a) none of his interviewees has complained, and b) he thinks it makes for better reading.

Ask a New Zealander to name a website domain name, and here’s what you get.

Trademe.co.nz, the country’s most-visited website, is the domain most often mentioned by Kiwis, followed by facebook.com, google.com, stuff.co.nz and nzherald.co.nz.

Although the researchers do not comment on it in their summary, I’m guessing this over-represents domain owners/managers when compared with the population.

Nevertheless, the research does break out results for the two groups.

In the case of the chart above, the top 5 sites remain the same when only domain owners/managers are responding. For the non owner/managers, nzherald.co.nz drops to number six, being edged out by hotmail.com.

Among the other findings:

More than 36 hours after Mr Layton’s untimely death at the age of 61, searching the websites of CNN and Al Jazeera English turns up nothing. (Screenshots here and here.)

And if the websites don’t have it, then I’d be surprised if the TV channels mentioned it at all.

Mr Layton died just three months after leading the New Democratic Party to a record-breaking result, including a virtual sweep of seats in Quebec. During the cross-country campaign, he looked to have made a remarkable recovery from prostate cancer. Then last month, looking gaunt, he announced that he had another form of cancer and would be stepping aside while undergoing treatment.

His family announced his death Monday morning, Toronto time, shocking the nation and triggering a public outpouring of grief.

Regardless of one’s political views, I think it is fair to call this a Canadian tragedy. Mr Layton was widely respected as a man of integrity, optimism and goodwill. His party has been responsible for some of the most cherished Canadian institutions, including pensions and universal health care. The NDP was to be a vital counterweight to the majority Conservative government in the new Parliament.

I’m not surprised that Fox News ignored his death. But the indifference of bona fide news services CNN and Al Jazeera only compounds this tragedy.

Yes, the events in Tripoli deserved top billing. But CNN had plenty of room for Ms Kardashian and endless football reports.

Here in New Zealand both TV newscasts led with bloated coverage of rugby, before moving on to the war in Libya. But that was no surprise, I’m sad to say. Some things never change.

Video of Rick Mercer visiting Jack Layton at his eco-home

The news section of Fairfax’s stuff.co.nz news website extended its lead over the news section at APN’s nzherald.co.nz in July, according to data released today by Nielsen.

Yahooxtra.co.nz was in third place.

Average daily unique visitors at stuff.co.nz were 16.4 per cent higher in July than in January.

All figures are based on NZ domestic traffic to the news sections of the various websites.

Once upon a time I was a reporter, then an editor. Now I’m a curator, part of a growing industry that tries to help people find their way through the flood of news and information.

Today, I got my 15 minutes of fame, when Steve Rosenbaum, author of Curation Nation, bestowed his “Curation King” award on me for the work I do at Eqentia, curating services such as the Future of News among many others. Thanks Steve!

Apparently wearing the crown to work is optional.

Interestingly, the sort of work we do at Eqentia – aggregating, filtering and disseminating news – is very similar to what Steve does with video through his new company magnify.net. In my spare time, I use magnify.net to manage a video page for the Ontario Science Centre Amateur Radio Club.