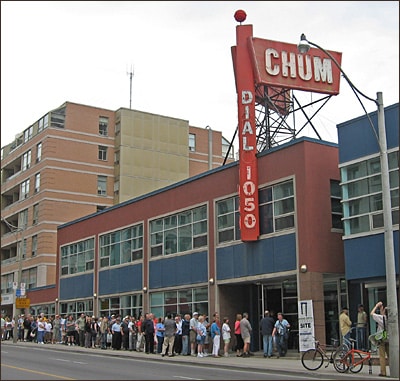 The scene was a genuine blast from the past — at least 300 people packing the sidewalk at 1 o’clock this afternoon in front of legendary Toronto radio station CHUM. From the front door at 1331 Yonge St, the queue stretched a half block north before disappearing around the corner and along Rosehill Ave.

But instead of hoping for a glimpse of Elvis or the Beatles, this crowd of seriously over 40s just wanted to see the station that introduced rock ‘n’ roll to Canadian radio. [All right, maybe some of those lined up had hopes the King might be somewhere in the building. After all, CHUM is still playing the same songs as in its heyday, even if we now have to call them “oldies”.]

The CHUM studios were an unlikely addition to this weekend’s list of Doors Open Toronto buildings. The former book bindery hardly exudes architectural charm. But with the station now celebrating its 50th anniversary playing rock’n’roll, the owners decided to open the doors for a limited three-hour span today only. And CHUM proved it could still pull a crowd.